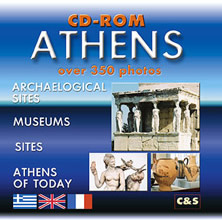 Minimum requirements of the system: Pentium 133MHz. RAM 32MB CD of Quadruple speed.Close all aplications/programs. Run the application from my computer, double click on the icon ATHENS of cd-rom and the application will run in 15-20 sec.(Pentium III in 6 sec.)Then follow the instructions of the application.

With just a double click on the icon ATHENS, through 350 photos and 3.000 words, tour ancient Athens, as well as modern Athens, in a pleasant manner.

This is an example... ACROPOLIS Important monuments:

Propylea: The gateway to Acropolis, designed by Mnesicles. Building started in 437 b.C., but in 432 b.C. it was suspended, as Athens was on the verge of war.

Temple of Athena Nike (Victory), or Apterou Nike (wingless victory): To the right of Propylea one can admire a small temple of Ionic order, designed by Callicrates and built after 421 b.C.

Parthenon: At the highest point of the rock, the temple of Athena the Virgin dominates. Two architects cooperated for its construction, Iktinus and Callicrates while Phidias the sculptor was supervising the project. Work began in 447 BC, and the building itself was completed by 438 BC, while the graven decoration was completed in 432 b.C. The temple is of Doric order with Ionic elements (frieze), with 8 columns on the east and west and 17 on the north and south.

Erechtheum: Temple of Ionic order dedicated to Athena Polias (city patroness), also to other deities and heroes. Built during 421-405 b.C.

At its south side the distinctive porch, supported by 6 caryatid figures, is unequaled in classical architecture.